Skip to primary content
Phenomenal – Strategic – Opportunities – Anointed – Powerful – Flexible
These are all words that we used to describe the last six days in Texas.  It did not start out or end real good as far as the transportation was concerned, but it was sandwiched with wonderful ministry for sure.
At 4:30 on Wednesday morning we discovered that our two month old reservations had been cancelled altogether and we were booked on new flights that would take us to Detroit, and have us arriving 8 hours later in Austin.  After some quick phone calls, God blessed us with new flights on a different airline that got us there about the same time, and coming home we had a similar situation – but we once again were able to get home on time.  But there were some moments where I really wasn’t sure.
Our trip included flying to Austin, through Dallas, then driving 3.5 hours back up to the Dallas area, staying there three days, before driving 4 hours to Stonewall through the Ft Hood area, then over to Johnson City twice, back to Stonewall, and finally back to Austin to fly home through Minneapolis.

One of the highlights of the trip was the late night worship at Southwestern Assembly of God University, where we joined with about 2000 others to sing praises to God from 10:30 p.m. until just after midnight.  That evening was also their first ever recorded live album, which will be released later this summer.  Jason came down with a cold our first two days, but God delivered him from it in 48 hours.

In Stonewall Texas, Jason and I led three Sunday sessions including a worship service and we taught and ministered the word and prayed for people at Trinity Lutheran Church.  This particular church is right across the street from the Former Texas White House of President Johnson who attended there on several occasions.  We toured his ranch and house and walked where many other heads of state and 8 former presidents had also visited and conducted national and international business. 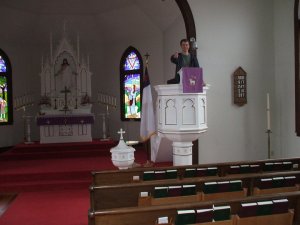 It was a distinct blessing for both of us to minister in a church where a former American President had also worshiped, and since it is an historical landmark, it remains much the same today as it was in the 60’s.  The people loved Jason’s worship and bought all of his CD’s that we took with us.
We were also blessed to share on Saturday morning at a pastors conference in Johnson City about city reaching, transformation and revival.  Then we were invited to minister to a group of people at a Pentecostal church who were attending a seminar, but the pastor felt the seminar should be interrupted so that we could teach and pray.  Jason led some powerful worship as well, and the people entered right in, danced, and rejoiced. 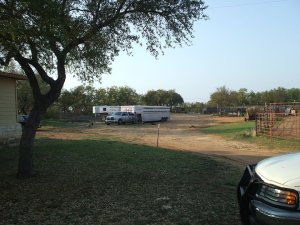 We were invited to a Cowboy church to minister on Sunday evening and that service lasted nearly 4 hours.  The pastor asked me to pray over the worship team and he later publicly stated that I prayed anointed prayers over each person with accurate words of knowledge as well.  Jason was involved with this too and had similar results.
The Lord stretched me in having me call up those who were under financial duress and stress and then pray for them, plus take a love offering for them.  The people gave cheerfully, and God had us sow sacrificially too.  I told the people that I would never ask them to do something that I was unwilling to do myself, and that I felt led to give a certain amount and then as I was writing the check, God said to double it, and Jason also gave too, so we sowed almost the same amount that they blessed us with in the love offering.  We were also able to financially bless still another pastor with some personal finances as the Lord led me on this trip to take two checks with me.  Normally I only take one because He often asks me to give, but this time it was obvious to my spirit that He was asking me to take two checks, and I was glad I did.  We try real hard to model everything we teach and share.
I also prayed extensively for 18 people for areas of deliverance, and this was also a new area of ministry for me.  The cowboy church had a unique flavor to it and they had a new facility that they enjoyed sharing with us.  Jason led worship there with one of their team and introduced some of his new songs.  We met and ministered to a church planting pastor and home builder from Galveston who has an amazing ministry down there in the gulf region.  It so happened that he and his wife personally know a friend of mine from high school who lives there too.

We were blessed to stay in a bed and breakfast way out in a remote area that was only accessible by dirt roads that went through free range cattle grazing, but had a beautiful view of the Hill Country, with miles and miles of unsettled land to view and enjoy, along with lots of wild life, yet this place which was so very far out there, had all of the modern conveniences including Satellite.

So there you have an overview of the last six days, and we would welcome your prayers as we leave on Thursday to drive to La Crosse Wisconsin to minister at Connect Church.  Jason will lead worship in all five sessions and I have been asked to do some teaching and ministry similar in theme and practice as that of Bill Johnson on hearing from God.  So it should be a great weekend.  We do have Sunday evening open if anyone has a connection for us on April 3rd.
Lets strategically move from being curious about the Kingdom of God to being intentionally serious.