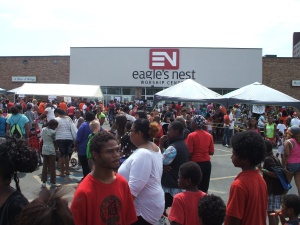 Earlier on Monday Dec 10th, I drove 1.5 hours to minister to some inmates at the maximum security prison in Tecumseh, Nebraska.  Some of the men who actually belonged to our church (Eagle’s Nest pictured here) have started their own prison ministry to the other inmates in that they save up their weekly salary of about $2 a week and use that money to buy snacks and toothpaste and other essentials to give to other inmates in the yard.  They also pray for the inmates and collect prayer requests and send them to the church we belong to in Omaha.  They witness and lead inmates to the Lord, so a few months ago I started writing to one of the leaders and this has led me now to where I go in and minister to the top four leaders to encourage and bless and teach and pray with them.

After being admitted to the waiting area inside of the prison, I felt led to sit next to a couple whose son is from Omaha and is prison there as well.  I shared with them what I wrote above and they asked me if I could ask the leaders to reach out to their son.  They also shared their contact information with me so I can keep in touch with them.

When I went in to meet with my guys, I shared the other inmate’s name and amazingly they had just reached out to him yesterday.  So I felt that was a God moment as the Lord had directed me to sit with this couple – his parents and then to discover that God had already had the men make contact with him was an amazing thing for sure.

As I taught and shared and prayed, there was an amazing freedom to share as the Holy Spirit just came into our small room and the power and presence of God was special tonight.  In this particular prison the inmates wear regular clothes in their free time, and so they are wearing similar things to what I am wearing.  Usually when I go in, they put an invisible mark on my arm that can be seen with a black light so that they know I am a visitor and not an inmate, but tonight they forgot to do that, so there was a little bit more work to verify that I was indeed from the outside and not a part of the prison population.

So there was freedom in the prison to minister, and then when I finally did get out, it was definitely freeing to know I was out.  I wrote to Pastor Bill Johnson at Bethel Church in Redding asking if he might donate ten of his books “When Heaven Invades Earth” for these and other leaders to study and he graciously and generously offered to send 20 books and I discovered that we actually need that many for the leaders.  So I am grateful for the influence of Bethel church and Pastor Bill Johnson.  (This is a picture of part of Bethel Church in Redding ) 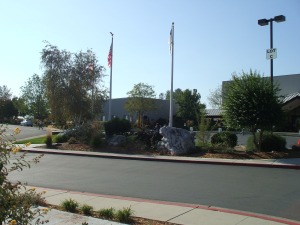 Then I drove 75 miles to attend the 8th night of the revival and arrived just as the sharing and teaching was drawing to a close, and began to enter into prayer ministry.  Tonight I actually prayed for more people, saw more manifestations and healings than I had in all of the other nights combined.  It was so cool to see children, high school students, college students, adults, older adults and others falling under the power of God – it was so freeing and easy to pray tonight – for a guy that almost did not get out of prison, it really was amazing.  I prayed for several people who also claimed to get well and be healed of various problems, issues, and diseases – way to Go God !  Wow – 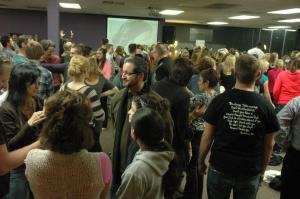 The building was packed tight with so many people – and I got to pray for a number of pastors and ministry leaders too – lots of joy and laughter – so much fun to see the Holy Spirit flowing so freely and helping others come into a real freedom with expressions of the Kingdom of Heaven being released on earth.

Each night they are live streaming the revival and tonight there were nearly 300 people watching – and in previous weeks there are generally 5 to 10 people watching whats going on but since the revival hit, there have been nearly 5000 people who have tuned in to see what is going on.  You can find it by going to The Omaha HUB and watching tomorrow and into the week as it was announced tonight that the revival will go thru the end of the week and then more evaluation will happen at that point. 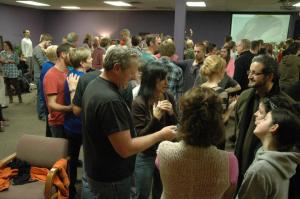 In 1999 when God called us to Omaha, I actually asked the Lord if we could go to Pensacola and attend the revival that was still going on there, and He said we could go to Pensacola and attend revival or we could move to Omaha and be involved in revival, so we chose involvement over attending, and the Pensacola revival ended just a few short months later, and now nearly 13 years later here we are involved in revival.  It has been a long wait, but we are so blessed to see and hear what the Lord is doing here in our area. ( see if you can find me in the picture directly above)

And just a thought – revival really is not an event though it appears that way, but revival is a person and his name is Jesus – so those who know Jesus, carry that revival with them where ever they go.  In this picture below, two public high school students were testifying to that very thing in that they had prayed for a teacher to get well of a shoulder problem and  pain, and the teacher got well in moments.  It has been so wonderful to listen to some of the testimonies of students and young people who  in some cases have only been saved for 2-3 days and yet are out witnessing, praying effectively for others and sharing the Kingdom of God with others.  They actually carry the anointing of God in a revival position of authority. 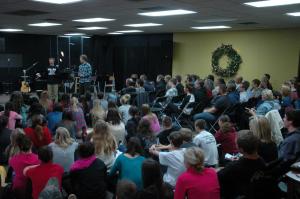 Jesus said in Luke 9:1-2 that he gave us power and authority.  With power you can ride a wave, but with authority you can create a wave.  Power and Authority are being released in the Omaha area in and through the Bethel Team that is here and then through the lives of so many others who have been impacted and touched by the power and authority of God’s word and His Holy Spirit.  Power is also the ability, might and strength to complete a task, but authority is the right to use that power.  You can learn more about this concept and biblical teaching in my book Downloads from Heaven.

The inmates that I mentioned above are reading it currently and sharing it with others, but they only have one copy.  If you would like to help me get more copies of my book into the prison, would you consider making a $15 donation per book.  They would like to have  at least ten more copies to share with other inmates.  Thanks so much for your consideration.  Please send me an email to the following email address at anointed2go@cox.net and I will give you more information on how you can assist with this process. 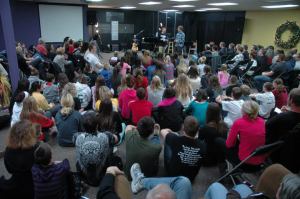