We went out to eat  at a restaurant that is only 12 blocks from our house that we have never been to in the 17 years we have lived here, and I initially engaged our waitress in some light humor, that she enjoyed, and later noticed our waitress was limping so I asked what was wrong?

Her name is Rhonda and she said her hip joint is out of the socket and that one leg was shorter than the other, and she has constant pain.

I offered to pray and prayed less than 15 seconds and asked her to check it out. She walked and said it was 80% better, so I prayed again for her for maybe 10 seconds.  She went walking again, and she came back beaming and gave me a spontaneous hug stating she had no pain. I told her about Kingdom Encounters giving her an invitation card and invited her to attend. Praise God for touching Rhonda with His healing power.  Jason and Diane were there and observed the whole thing too.  It was really cool as God just demonstrated Himself to her.

This past Sunday at Kingdom Encounters was pretty amazing, as we have been having ongoing revival services each week that progressively show how God is responding to the hunger of the people.  Here is what happened: 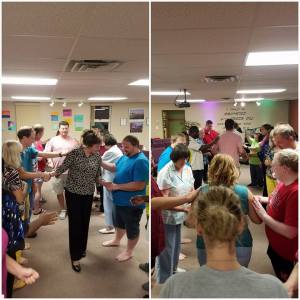 Kingdom Encounters had singing in the spirit, lots of dance, joy released and demonic manifestations with one young lady being delivered today. The move of the Spirit was so strong today, that people would fall over just when I got near them without me actually having to pray for them. We had nearly 40 people show up for pre-service prayer which is the largest crowd ever for pre-service prayer.

We started with one of our leaders blowing through a consh shell since we don’t own a shofar. It was incredible. Worship lingered and centered in on the dance, joy and rejoicing. The flags and artists were well engaged too. This was followed by four testimonies in which I interviewed the folks about what God has been doing in their lives. Then it was back to worship for lingering worship that was interspersed with prophetic words at the mic from those who felt lead to share.

I then taught a message about how and why the Joy of the Lord is our strength and how the normal response to the reading of the law was repentance, weeping and reverence, but in Nehemiah 8 the response is one to eat the fat, drink the sweet and not to mourn but to celebrate with the words to rejoice greatly. We learned that we are only as strong as our joy is strong. During the message there 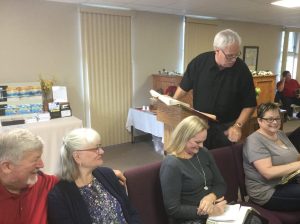 were some fun spontaneous moments including some where I pushed the podium around the building stopping to preach in front of certain people. I also shared about the reasons David Danced before the Lord and what the result was when his wife tried to rebuke him, and how the dance ushered in the presence of the Lord to that kingdom.

After the message we had prayer with impartation to receive joy and once again the majority of the people came forward. A unique thing happened today in that for the first ten people or so, I just came and stood next to them without praying, but just offering the presence of the Lord and all fell under the power of God, many laughing in the Spirit. About this time a demon began to manifest in one young lady and several took here to the back of the room where she was screaming and in about five minutes she was delivered. She later said it felt like there was a heavy presence that came off of her like a loud “BOOM,” but otherwise could not remember the demonic encounter at all. 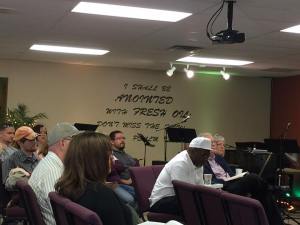 Our service concluded with a video worship song led by Byron Cage and the song “The Presence of the Lord,” filmed in Los Angeles at a very large Church of God in Christ, and our people were well engaged in dancing and rejoicing. The revival culture continues with the enemy trying to push his way in, but the presence of God pushed him out.

If you are hungry for more of God, you will feel right at home at Kingdom Encounters.  Please check out our website at http://www.kingdomencounters.net

1 thought on “Miraculous Healing at Local Restaurant in 30 seconds, and Deliverance of Loud Demonic Manifestation..”